As the lone Brit on a U.S.-based automotive news and culture site, I obviously realize the majority of driving opportunities won’t fall my side of the Atlantic. That’s cool—it’s not as though anyone in the UK is really allowed to drive anywhere at the minute. And I still get to indulge myself with everything under the hood and on-track. Still, when the chance came up to have a go in the new Mercedes-Benz EQS electric luxury flagship sedan, I fired back an email straight away. Of course dudes, when and where?

Well, the when was this Tuesday. The where was Microsoft Teams. In these tricky times, you see, you can’t exactly get flown out to Germany to slide, glamourously, into the luxury interior of the EQS, crack out a half-hour of driving and be sent on your way for an embargoed review, so Mercedes found some other solutions to get a feel for the car. I don’t want to totally dunk on that because clearly a lot of thought and work had gone into it, but if the rise of infotainment wasn’t a blunt enough gaze into the Black Mirror, this felt like an episode outline that really hammered that home.

And the EQS is very much the car of The Future. An all-new model riding on an all-new electric platform, it’s meant to be the high-tech flagship you’d expect with an “S” in the name. It’s expected to have concept car looks, a range of nearly 500 miles on Europe’s WLTP testing cycle, an output close to 500 horsepower, and the intense Hyperscreen dashboard—fully 2.6 square feet of digital touch screen, a HUD and augmented reality. Whereas the EQC crossover has been a bit of a flop, the EQS should be a true Tesla-fighter in traditional S-Class fashion with loads of innovative tech that may or may not trickle down to cheaper cars someday. 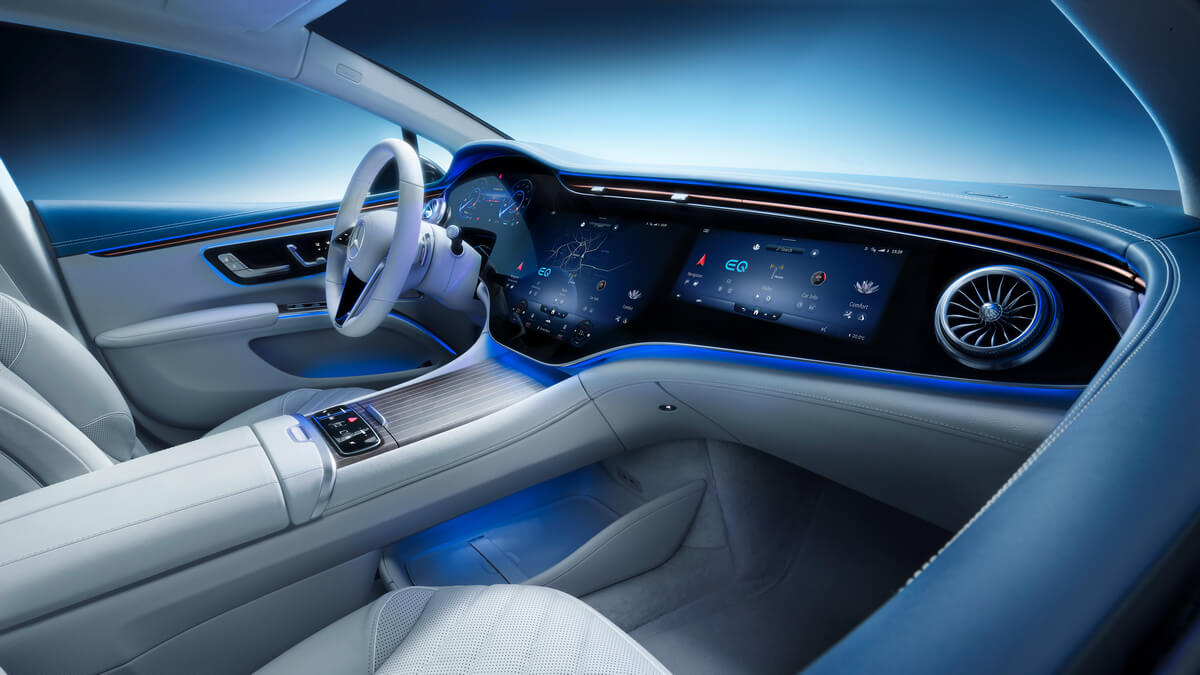 In that vein, a “virtual test drive” is kind of fitting. I’m not absolutely sure anyone, Mercedes itself included, knew what that really entailed, though. Definitely not me, beforehand.

It might sound like having a crack on the car in iRacing, which I’d be fully up for. It doesn’t give a massively accurate sense, maybe but you could have some questionably fun times on Twitch. Maybe realizing unleashing its luxury sedan to gamers wasn’t the angle they wanted to go for, Mercedes instead opted for a co-drive; I was the virtual passenger in a car being driven by one of its experts, who could discuss everything about the EQS with me on a short trip around (I think) the roads near its factory.

It wasn’t that easy to work out exactly where anything was, to be honest, other than that the late afternoon sunlight looked like the kind of golden hour that is really nice to drive in, without rush hour traffic. I couldn’t adjust my view or see out the windshield, just gaze into the Hyperscreen that sits like a shard of some space relic you probably shouldn’t touch, across the whole dash.

Full disclosure: there were a few things that made me uniquely poorly-placed for this whole thing. One of which is that about five minutes before the call was due to start I remembered that, like any London resident, the only thing I fear more than getting into an Uber to realize they’ve got talk radio on is when the driver starts chatting to me. Obviously, there are the regular anxieties about this, like having to have some kind of weird political discussion but I have another one: I’m pretty much deaf if I can’t lipread you. I’ve spent way too much of my life standing next to race cars and to be honest, I wouldn’t trade it back to be able to hear mediocre guitar chug but it is a problem when someone facing away from me starts talking, with background noise.

Mercedes
The EQS concept from 2019.

Turns out that’s actually a lot worse, when not only are they facing away from me, with background noise but they’re being beamed to me through video conference on (presumably) mobile internet, from a moving vehicle. Although my driver seemed incredibly knowledgeable and enthusiastic about the EQS, I didn’t catch a lot of what he said and had to play the advanced guessing game people with partial hearing do in picking out my own questions and responses.

So I had, slightly unwittingly, launched myself into a particular kind of personal, virtually vehicular hell. Which I’m pretty sure is not the overall feel Mercedes is going for in its new luxury sedan.

I’m not sure it would have made it that much better if I hadn’t been, though. It’s no one at Mercedes’ fault that the world’s a nightmarish dystopia right now, but while some post-pandemic things might stick—things like remote work or our newfound appreciation for sweatpants, for example—I am not sure virtual test drives will.

Can you get a feel for a car you’re not driving? Yeah, for sure. I’m totally aware of my own driving limitations and I’ve definitely had a few track days where getting in the passenger seat and letting someone with a race license hoon a car gives me way more idea of what it’s capable of than hogging the wheel myself could. But can you get that, staring into the giant, looming touchscreen, through your laptop? It’s a bold attempt and Mercedes gave it a really good go but: no.

It doesn’t work that well as a Q&A, it definitely didn’t give me a lot of idea about what the car’s like to drive. Although my driver was able to go through all the potential features (including a performance mode that definitely had fake engine sounds) it was hard to well, err, see anything other than that gigantic touchscreen. And think about how I can’t believe anything that colossal is anything other than a distracting hazard—although maybe if you’re not directly staring into it from above, unable to actually do anything, it feels different.

Do I know anything more about the EQS? Not really, except that there’s a wireless charging point in that big bin in the central console. That’s not really anyone’s fault. But let’s not run this as a bottle episode again.

A static walkaround of the car might have worked better. There are loads and loads of interesting tech details on the EQS, which we’re covering in a longer story set to run later today. Those are absolutely worth your time. From the fact this is Merc’s first sincere attempt at something that could beat Tesla’s stats and mass-market appeal to the extremely shout-about fact it’s the only production car with a 0.20 drag coefficient, despite looking like a pretty regular vehicle and not some sort of half-shredded sports dragster, the EQS will be one to watch for sure.

Just not on a Microsoft Teams meeting, that’s all.

Got a story tip? Mail me at hazel@thedrive.com